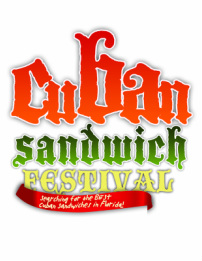 The biggest names in Florida’s communities re-united and joined efforts in celebration of Florida’s Rich Cultural Food and History!

"POPULAR VOTE" (Occurred via text messaging on Saturday, March 30th between 12 noon and 2:00 PM.) These votes had to be manually counted on Sunday and Monday.

..and there you have it, Congrats to ALL THE GREAT Restaurants Participating!!!!!

Check out www.TheCubanSandwichFestival.com for the complete list of Competitors OR click the links below to get to know the competition!

Who has the best Cuban sandwich? You'll be pressed to come up with an answer at the second annual Cuban Sandwich Festival in Ybor City. It's billed as a competition with more than 20 restaurants from across the state, but most of them are local. Read more from the Tampa Bay Times [http://www.tampabay.com/things-to-do/events/cuban-sandwich-festival-hits-ybor-city/2111713]

Taste the BEST Cuban sandwich in Florida at the second annual Cuban Sandwich Festival! Over 20 restaurants from around the state will be competing to see who makes the best Cuban sandwich. Read more from VisitTampaBay.com [http://www.visittampabay.com/blog/bay-blogger/second-annual-cuban-sandwich-festival-this-saturday]

Radio personality Jack Harris walked around the courtyard next to the Ybor City Museum on Saturday with the glazed look of someone who had eaten too much. That because Harris, host of WFLA (970 AM)'s morning talk show, did eat too much. “I think I've had my fill of Cuban sandwiches for the next three years,” Harris said. Read more from the Tampa Tribune [http://tbo.com/south-tampa/best-cuban-sandwich-decided-in-ybor-today-b82471641z1]